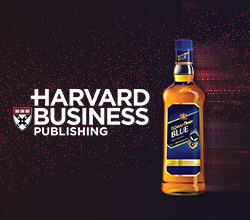 The journey of Officer’s Choice whisky, from being an also-ran to overthrowing the established Bagpiper and McDowell’s in flat six years, and then to become the world’s second largest spirits brand by volume, has now made its way to the case study list at the prestigious Harvard Business School. The flagship brand from the Kishore Chhabria-promoted Allied Blenders & Distillers (ABD) clocked sales of 26 million cases in 2015-16, a growth of 11 per cent over the previous year with a market share of 40 per cent of the regular/mass whisky segment. The case study on Officer’s Choice is part of a select club of 10,000 case studies from around the world and is one of the few based in an Indian context, which has been published by Harvard Business Publishing, a wholly-owned subsidiary of the Harvard University.

In 2008, ABD was selling just 6.6 million cases annually with a 15 per cent segment market share. By 2013-14, the Officer’s Choice Whisky overthrew the then entrenched brands from the market leader United Spirits by a slender margin and then there was no looking back. The company had brought in industry veteran, Deepak Roy as Executive Vice Chairman and Chief Executive in 2007 to spearhead its business, at a time when the Bagpiper Whisky from United Spirits was the market leader, selling 6.63 million cases more than Officer’s Choice.

The case study highlights the importance of the right marketing strategy using customer insights in a brand reinvention exercise.

The study notes that when Roy took over, he wanted to take the brand to a leadership position in three years. “ Officer’s Choice is equal to ABD itself as 99 per cent of the volume and value contribution come from this. So, anything that makes Officer’s Choice vulnerable makes ABD vulnerable. “We need to relook at the entire marketing mix to take the brand along with the company to the next level,” the study quotes Roy as having said upon joining the company.

Based on exhaustive qualitative research, the case study on the consumer profile of the mass whisky segment, the brand has found that it is low on salience and unable to connect with the consumers on an emotional level. Marketing Head Ahmed Rahimtoola, who also joined the company in 2007, observes that when he joined the brand value perception for Officer’s Choice was low compared to Imperial Blue and Bagpiper. The brand was missing the youth connect. To re-invent the brand, the company came up with a three-pronged strategy -- repackaging, repositioning and reconnecting with consumers.

The team hired one of the best design consultancies in the country to create a new identity for the brand and the brief was to upgrade the packaging to have good shelf appeal and be seen as more modern, contemporary, dynamic and stylish, with a new age look. The case study notes that the UB Group veteran Roy wanted a disruptive campaign to reposition the brand, without roping in celebrity endorsers.“With a strong brand like Bagpiper on one side and our limited resources on the other, we will have to make the idea of our campaign the hero; no Bollywood celebrities for us.“The campaign should be disruptive and reintroduce them to the brand. It must tell all the new entrants to the category that Officer’s Choice needs to be their first port of call,” Roy had said.

To reconnect with consumers, ABD decided to reach out in a more direct manner, through large experiential properties, cultural connect programmes and ground level visibility to give the brand a larger-than-life feel.