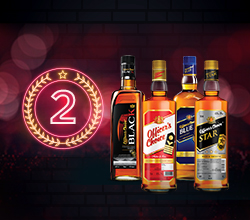 Country’s alcohol brands are reaching new heights after gaining tremendous recognition on the world platform. Indian Whiskey brand, Officer’s Choice has notched up the No. 2 rank in world’s 100 top-selling brands. Along with Officer’s Choice, two other Indian labels find a place in first ten brands of the IWSR Top 100 -McDowell’s and Imperial Blue. It is seen as a great accomplishment for the local spirits brands to dominate in the world despite facing tough times in 2016 with increasing prohibition and overall slowdown. Meanwhile, South Korean Soju brand Jinro maintained its stronghold grip as the World No. 1.

The two other local spirits label, McDowell’s and Imperial Blue are ranked sixth and tenth respectively. Diageo-owned McDowell’s sold 25.6 million cases Pernod Ricard-owned Imperial Blue sold 18 million cases. McDowell’s have seen a decline of 2.3 in the sale figures compared to 2015 while Imperial Blue has recorded a growth of 2.9 compared to their 2015 performance. IWSR has been a trusted and largest source of data and analytics on the global alcohol-beverage market covering brand performance in 155 countries for the past four decades.