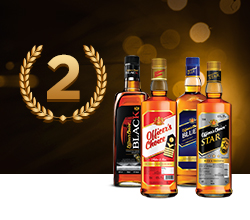 Indian whiskey brand Officer's Choice is now the second largest spirits brand in the world, surpassing Thailand-based rum Ruang Kao and Emperador brandy from Philippines. Korea's Jinro soju, a harsh rice spirit continued to be the world's bestselling brand of liquor in 2015, with sales of 65 million cases, followed by Officer's Choice that sold about 34 million cases, according to a July International Wine and Spirits Research (IWSR) report.

India is the second-largest spirits consuming country behind China and the largest whiskey drinking nation, with annual consumption reaching 189 million cases in 2015. However, India's overall liquor consumption at 314 million cases grew less than 1 per cent during the year, even as that for whiskey grew nearly 4 per cent.

With Officer's Choice, we have made a culture of best quality at very affordable prices. We have grown at around 15 per cent in a tough environment of prohibition and slowdown," said Jeetu Hemdev, executive director, Allied Blenders Distillers that has knocked Diageo's Johnnie Walker and Smirnoff vodka off their perch in the past two consecutive years.

Alcohol in India remains a politically charged commodity, subject to federal and state regulation, taxation and interference. Several states including Bihar, Kerala and Tamil Nadu are either advocating or have already prohibited liquor.