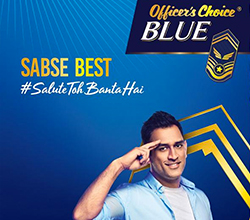 Created by Metaphor Communications, the 45-second film begins with M S Dhoni acknowledging and saluting all who do not, and did not, resort to any ‘setting’ in life.  Dhoni then walks us through slice-of-life situations, lauding the honesty of people who have not done any ‘setting’ to achieve their goals. The film smartly covers relatable issues of college admissions, traffic penalties, business contracts and elections. It also touches on social issues such as dowry and reinforces the importance of making the right choice. The TVC ends with the acknowledgement of, ‘Salute Toh Banta Hai’, for people who have not done any setting. For them, the end does not justify the means, #SettingNahiKi.

The company, in a statement, said Officer's Choice Snacks has stood for the core human value of integrity and doing things right, and M S Dhoni mirrors the very same virtues. Dhoni is known for his calm and collected demeanour, his ability to make the right choices on the field as a cricketer and in life . His personality finds resonance with the positioning on righteousness of Officer's Choice Snacks.

Commenting on the association, Ahmed Rahimtoola- Head Marketing- Allied Blenders & Distillers says, “Officer’s Choice Blue snacks has always stood for a strong sense of purpose. Positioned on the platform of righteousness, the brand has built a distinctive personality around honesty and integrity. M S Dhoni as a brand, embodies similar values and we found a strong fit to pursue this engagement. We’re hoping #SettingNahinKi’ becomes an inspiration for people to walk the right path, no matter how harsh the challenge appears to be.”

When asked about the campaign, M S Dhoni said, “Life is all about the choices we make; and those who make the right choice deserve a salute. I’m glad Officer’s Choice Blue Snacks is inspiring people to always stay “righteous” in walks of life, regardless of the difficulty of situation and severity of demands.”

Arun Pandey, Chairman of Rhiti Sports that manages MS Dhoni’s commercial interests, said “The whole nation looks up to M S Dhoni as an inspiration and this campaign is a sincere effort to laud the honest people of this country to chase their dreams the right way.”