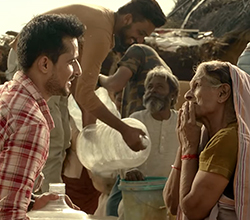 Officer’s Choice Blue launched a new advertising campaign, ‘Salute Toh Banta Hai’- a creative that repurposes the brand’s long-standing platform of the ‘Good Samaritan’. The four TVCs put out by Officer’s Choice Blue, narrate testing situations in slices of everyday life and defines the actions made by the protagonists, paving the way for a better and more caring world.

The communication conveys the ‘good’ in actions of giving way to an ambulance over a VIP vehicle, respecting the lowest ranks in office, concern to assuage apprehension of a woman traveling alone, and bringing help to people in need. The narratives create a strong people connect - with positive actions that are spontaneous and relatable- embedded in the belief, and keeping the faith in doing ‘good’. The TVCs end with the tagline ‘Salute Toh Banta Hai’, which acknowledge the contribution of these everyday heroes. The campaign has been conceptualized by Metaphor, A Triton Communication subsidiary and directed by Rajesh Saathi from Keroscene Films.

Ullas Chopra, national creative director, Triton Communications said, “This has been quite an interesting campaign. The challenge was to present righteousness in a manner which is not preachy or confrontational. We decided to take an approach that applauds people for their efforts to do the right thing and be good Samaritans. Once in a while we get an opportunity to work on communication that warms people's hearts and remind people of their better side. The most satisfying thing for us has been how all elements came together - the storytelling, the music and the lyrics. We set out to touch hearts and I think we managed to do that very well. “ Commenting on the campaign, Ahmed Rahimtoola, vp, marketing, Allied Blenders and Distillers, said, “The process, starting from segmentation research to effectively delivering on new communication, has been incredible. Officer’s Choice franchise is the largest in its category globally, and it is imperative that we deliver ahead of expectation. We take pride in the aesthetic communication which very strongly conveys the brand’s long–standing view on righteousness, and the need to bring about positive change.”